North from Sydney you’ll find the coastal playground of the Central Coast (Gosford, Terrigal, Woy Woy).  The area is a mass of waterways from the Brisbane River to Lake Munmorah and the Tuggerah Lakes.

On the northern tip lies the largest coastal  saltwater lake in the country, Lake Macquarie.  Four times the size of Sydney Harbour,  the towns and villages dotted around its shoreline with a population of 250,000, make up the City of Lake Macquarie.

Half an hour north of the lake is the port city of Newcastle the second most populated area in New South Wales.

The Newcastle Port Stephens Airport lies between the two towns right next to the Williamtown RAAF base.  The airport shares the runway of the RAAF Base so on weekdays it is not uncommon to see the fighter aircraft practicing manouvres and test flights.

Port Stephens is a popular seaside metropolis and haven for many spectacular yachts. 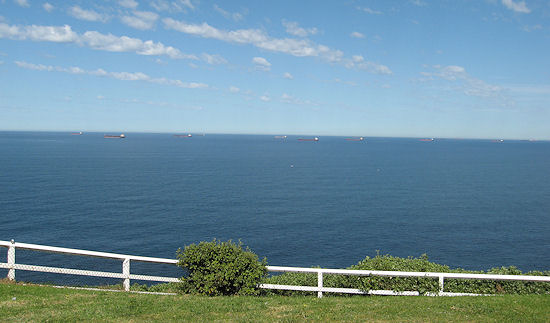 Located 80 kilometres south of Sydney, Wollongong covers 714 square kilometres and occupies a narrow coastal strip bordered by the Royal National Park to the north, Lake Illawarra to the south, the Pacific Ocean to the east, and the Illawarra escarpment to the west.

Wollongong is proud of its industrial roots, and is still known and acknowledged as one of Australia’s leading industrial centres. While steel and other manufacturing industries remain an essential part of the local economy.

Construction of the spectacular Sea Cliff Bridge to the north has given even more focus to the burgeoning tourism industry, and information technology, hospitality, health services and telecommunications continue to grow as key industries of the region.

Wollongong enjoys a rich sense of community and cultural heritage, with people from more than 30 different language groups and 20 religious backgrounds living in harmony. A deep respect for others’ traditions and regular celebrations of diverse customs add to the vibrant tapestry of community life and provide another dimension to our increasingly sophisticated city.
>>MORE>>
West of Sydney
The Blue Mountains is a rugged region west of Sydney in Australia’s New South Wales. Known for dramatic scenery, it encompasses steep cliffs, eucalyptus forests, waterfalls and villages dotted with guesthouses, galleries and gardens. Katoomba, a major town in the area, borders Blue Mountains National Park and its bushwalking trails. Echo Point affords views of the storied Three Sisters sandstone rock formation.

The Blue Mountains is a colourful place for an entire palette of seasons. Every season brings with it a change of hues in nature as well as a range of unique festivals and events designed to reflect the beauty of the months.

There’s Yulefest and Winter Magic in Winter, Leura Gardens Festival in Spring, Wild about Waratahs and the Rhodo Festival (as it is affectionately known) in Summer to list just a few of the colourful events. >>MORE>>